Donald Trump has cancelled his planned summit with the North Korean leader, Kim Jong-un, blaming his decision on a threatening statement from the Pyongyang regime, and warning that the US military is “ready if necessary”.

The abrupt decision, which came as a surprise to US allies in the region, came after an exchange of menacing statements from US and North Korean officials.

North Korea responded to the cancellation by saying Kim Jong-un had made the utmost effort to hold the summit with President Trump and the country was willing to resolve issues with the United States.

“We tell the United States once more that we are open to resolving problems at any time in any way,” North Korea’s vice foreign minister Kim Kye Gwan said in a statement.

The Trump administration had been growing increasingly concerned about a lack of response from Pyongyang in recent days to efforts to set up planning meetings in the run-up to the summit scheduled for 12 June in Singapore.

“Some of the prep work on the summit was halted because we simply could not get them to pick up the phone,” a senior White House official said.

In a formal letter to Kim released by the White House, Trump said he had been “very much looking forward” to meeting the North Korean leader.

But he wrote: “Sadly, based on the tremendous anger and open hostility displayed in your most recent statement, I feel it is inappropriate, at this time, to have this long-planned meeting.”

Trump declared that the meeting would not take place “for the good of both parties, but to the detriment of the world”.

In remarks to the press after the letter was released, Trump said it was still possible the summit could go ahead, albeit at a later date, but warned Pyongyang that the US and its allies would respond if it carried out “foolish or reckless acts”.

Asked if cancellation of the summit increased the risk of war, he replied: “We’ll see what happens.”

Meanwhile, the president said his campaign of “maximum pressure” would continue, involving the “strongest sanctions ever imposed”. However, in the wake of Trump’s withdrawal from this summit, soon after abrogating a nuclear deal with Iran that had global support, there are now serious doubts over his ability to galvanise international support for increased sanctions, or even enforce the existing sanctions regime.

Trump’s letter to Kim mixed regretful and conciliatory passages with a reminder of the size of the US nuclear arsenal. 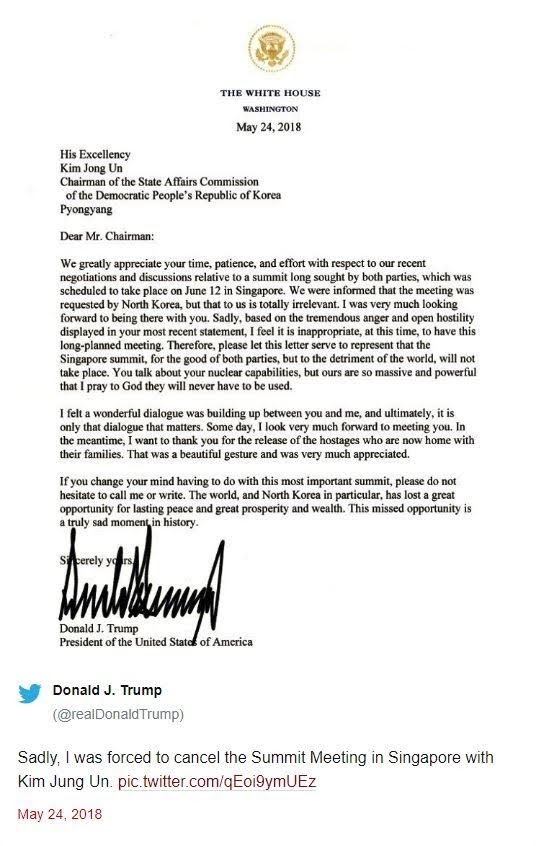 “You talk about your nuclear capabilities, but ours are so massive that I pray to God they will never have to be used,” Trump wrote.

The cancellation came two days after a visit to the White House by the South Korean president, Moon Jae-in, who had sounded hopeful about a historic summit that he portrayed as vital to peace on the Korean peninsula.

Moon held an emergency meeting with top officials just before midnight local time on Thursday. His office appeared surprised by the announcement, with spokesman Kim Eui-kyeom saying: “We are trying to figure out what President Trump’s intention is and the exact meaning of it.”

Pyongyang also appeared to be taken entirely by surprise.

“There was a real sense of shock amongst the people I was sitting with, the North Korean officials,” Will Ripley, a CNN reporter, said shortly after he read Trump’s letter to them.

Ripley was part of an international group of journalists invited to North Korea to cover the destruction of a nuclear test site. The detonation of a system of mountain tunnels at Punggye-ri was presented by the regime as a gesture of good faith, although the regime has declared that it has made sufficient advances in its nuclear weapons technology to no longer need to conduct tests.

Speaking in Geneva, the UN secretary general, António Guterres, said he was “deeply concerned” about the cancellation of the summit, and appealed for a continued dialogue to “find a path to the peaceful and verifiable denuclearization of the Korean peninsula”.

A White House official said Trump had made the decision to cancel after speaking to Vice-President Mike Pence, the secretary of state, Mike Pompeo and national security adviser, John Bolton. The summit had been in grave doubt for days, the official said, but the last straw was a strongly worded statement by North Korea’s vice-foreign minister Choe Son-hui, which in turn was a response to hardline comments by Pence.

In her statement, Choe warned that Pyongyang could make the US “taste an appalling tragedy”.

If the talks are cancelled, Choe suggested the two countries could engage in a “nuclear-to-nuclear showdown”.

She said: “Whether the US will meet us at a meeting room or encounter us at nuclear-to-nuclear showdown is entirely dependent upon the decision … of the US. We will neither beg the US for dialogue nor take the trouble to persuade them if they do not want to sit together with us.”

In his letter, Trump thanked Kim for releasing three US citizens last month. He said: “That was a beautiful gesture and was very much appreciated.”

He left the door open to a future meeting if and when the war of words calmed down.

“I felt a wonderful dialogue was building up between you and me, and ultimately, it is only that dialogue that matters. Some day, I look very much forward to meeting you,” he wrote in a letter that which contained all the oddities of syntax and grammar of Trump’s speaking style.

“The president dictated every word himself,” a senior White House official said.

“If you change your mind having to do with this important summit, please do not hesitate to call me or write. The world, and North Korea in particular, has lost a great opportunity for lasting peace and great prosperity and wealth. This missed opportunity is a truly sad moment in history.”

Pompeo also blamed the summit’s cancellation on North Korean rhetoric “and the fact that we have not been able to conduct the preparation between our two teams that would be necessary to have a chance for successful summit”.

North Korean officials failed to appear at a logistics meeting with their US counterparts, earlier this month.

“They stood us up,” a senior White House official said.

A follow-up meeting in Singapore had been planned for this weekend, but Pompeo said: “We had received no response to our inquiries from them.”

The immediate trigger for the row that derailed the summit was the Trump administration’s repeated references to the “Libyan model”, which was presented by some officials as referring to Muammar Gaddafi’s 2003 agreement to abandon his nuclear weapons programme and surrender related equipment and materials to the US.

Trump and Pence, however, used the phrase to refer to the 2011 toppling of Gaddafi and his subsequent murder at the hands of rebels after a Nato-backed insurrection. On Monday, Pence echoed the president when he said on Monday: “This will only end like the Libyan model ended if Kim Jong-un doesn’t make a deal.”

North Korea analysts said there were deeper problems underlying the proposed summit than heavy-handed use of menacing language.

“Expectations were overblown for the North Korea summit, and there are legitimate reasons to question whether Kim Jong-un is serious about giving up its nuclear weapons, but Trump’s letter is an overreaction and ignores the role that top officials played in provoking this crisis,” Kelsey Davenport, director for non-proliferation policy at the Arms Control Association, said.