At this point, it’s more likely a matter of when -- not if -- the 10-year Treasury yield hits 3 percent. And that apparent inevitability raises a pressing question: How to trade when it happens?

The 10-year yield hasn’t been above 3 percent since January 2014 and since the start of last year, bond gurus like Jeffrey Gundlach at DoubleLine Capital and Scott Minerd at Guggenheim Partners have highlighted the level as critical to determining whether the three-decade bull market in bonds is at an end. It’s also seen as the point at which equity markets might crack and the dollar could halt its slump against other major currencies.

Here’s what to watch for when the benchmark 10-year Treasury yield reaches that much vaunted number:

The most immediate question for traders: Do 10-year yields hit 3 percent and retreat, or does positioning signal a sharp move higher? Anticipating the volatility and its implications could make a big difference.

“Certainly as we get closer to 3 percent, people will get nervous,” said Michael Cloherty, head of U.S. interest rate strategy at RBC Capital Markets. “I would expect flows to pick up as we’re closer and closer to 3 and to see some choppiness in the market.” 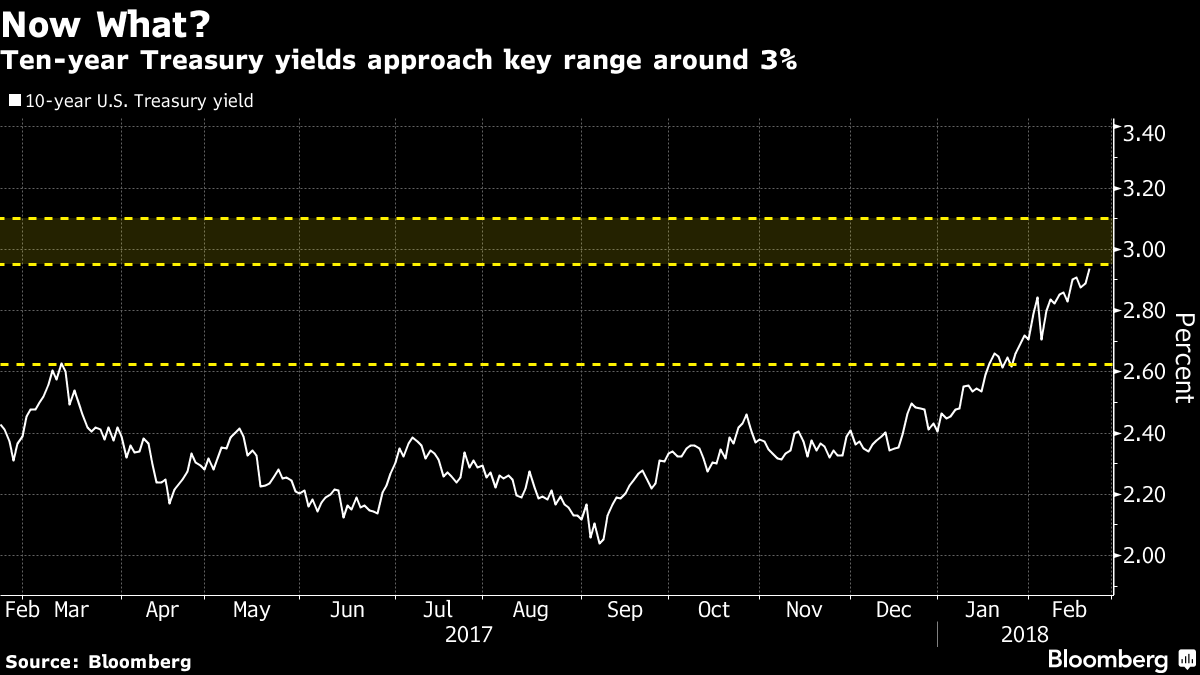 Volatility may not be as bad as some investors fear. So-called “short gamma” strategies, which effectively bet that the market will stay quiet, have been steadily hedging those wagers, according to a New York trader who isn’t authorized to speak publicly and asked not to be identified. That means an accelerated break through 3 percent may not happen.

In fact, open interest on 10-year Treasury futures suggests 3 percent may not be the crucial level after all. There are a large number of March puts at a 120 strike price, equivalent to a 2.95 percent yield. That helps explain the resistance to moving much higher than that so far this year.

Another large accumulation of puts comes at a 118 strike price in April, equivalent to a 3.1 percent yield on the 10-year security. Dealers who are on the other side of those options could hedge during a selloff by purchasing 10-year Treasury futures, thus creating inherent support.

In other words, those bond bears ready to watch the Treasury market falter at 3 percent may be in for a slow grind.

To be precise, traders will be watching for the 10-year yield to break through 3.0516 percent, the intraday high from Jan. 2, 2014. You have to go back to July 2011 to find the last time the yield exceeded that level.

Technical analysis has its naysayers, but it’s been a harbinger of things to come since Donald Trump’s win in the 2016 presidential election. For all of 2017, the key 2.64 percent level on 10-year yields couldn’t be broken. Strategists warned that a breach left little stopping an ascent to 3 percent.

Sure enough, yields soared past 2.64 percent in January and now they’re knocking on the door of 3 percent.

The next stop (once 3 percent is convincingly in the rear-view mirror) is less clear. Beyond 3.05 percent, the next area of yield resistance would be around 3.14 percent or 3.15 percent, which relates to levels from late 2010 and early 2011, said Marty Mitchell, a former head government-bond trader at Stifel Nicolaus & Co. and now an independent strategist. Further out, he points to 3.215 percent to 3.25 percent. 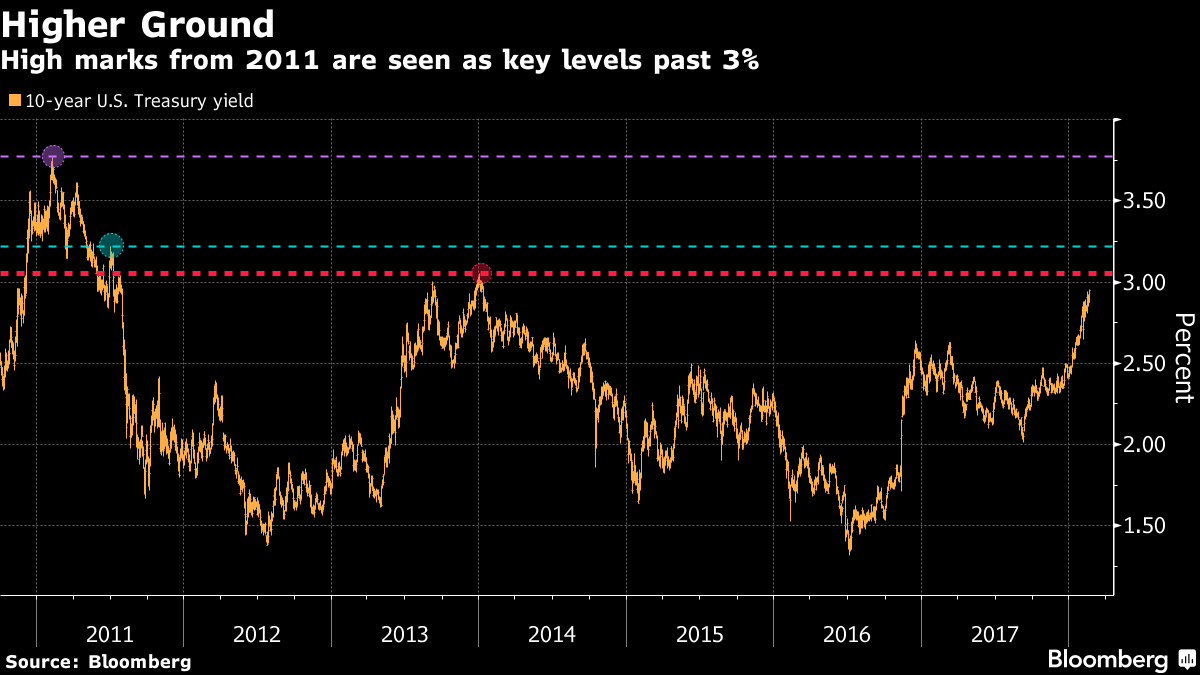 In the distance, a big key level would be near the highs for 2011, Mitchell said. The yield reached as much as 3.77 percent in February of that year. Of course, that’s a ways away and, as the positioning data shows, it’ll be a struggle to take out each successive key level.

“I think we test 3.05, then we see a more sustained correction downside in yields,” Mitchell said. “But I believe we’re in an uptrend in yields, so any strength in the bond market needs to be sold.”

Some strategists say a 3 percent 10-year yield represents the end of the stock market rally, with corporate borrowing costs becoming too punitive and fixed-income looking too appealing. Others, like Jonathan Golub, chief U.S. equity strategist at Credit Suisse Group AG, say 3.5 percent is the level to watch.

Regardless of the exact level, bond traders may find that the best barometer of which way yields are headed after 3 percent will come from stocks. A bout of selling in equities probably means the “tug-of-war” between the two asset classes is alive and well, serving as a cap on yields and perhaps preventing too much tightening from the Federal Reserve. If stocks shrug at 3 percent, then it’s a green light for the selloff to carry on.

Hedge funds and other large speculators have a lot riding on the outcome. The group has boosted short bets in 10-year Treasury futures to a record, according to Commodity Futures Trading Commission data through Feb. 13. That positioning could exacerbate the market moves in either direction.

Lost in the question of “what’s next” is that 3 percent marks the highest yield on a 10-year Treasury note in more than four years. That’s a compelling proposition, particularly for hold-until-maturity investors, who are relatively insensitive to price swings.

It’s tempting to wait for an even better entry point. But more than half of the 59 analysts surveyed by Bloomberg this month say the 10-year yield will end 2018 at or below 3 percent. After all, the Fed’s own projections call for its target rate to climb just above 3 percent in 2020, before settling at a longer-term rate of 2.75 percent.

“If you think that 3 percent is where the Fed is going to stay, you’ll see a significant level of demand at those levels,” said Bruno Braizinha, a rates and cross-asset strategist at Societe Generale SA.

His fellow strategists at Wall Street banks are finally seeing signs that the overwhelmingly bearish momentum is starting to fade. Citigroup Inc., for instance, is looking to go long if yields keep climbing. Barclays Plc isn’t waiting for 3 percent, instead recommending buying at 2.9 percent.

Then there are those in the middle, like Cloherty at RBC. A 3 percent 10-year yield could serve as a good short-term trade, he said, because Japanese investors are likely to step in and buy after their fiscal year ends on March 31. But it’s probably headed higher toward the end of 2018.

“The pattern will be a sideways slide for the second quarter and then we leak higher in the second half on Fed tightening and an awful lot of Treasury supply,” Cloherty said. “We see people trying to protect themselves more against higher rates, but I don’t think that just because we break 3 we’re destined to go to 3.5.”