WASHINGTON/BEIJING (Reuters) - U.S. President Donald Trump is seeking to impose tariffs on up to $60 billion of Chinese imports and will target the technology and telecommunications sectors, two people who had discussed the issue with the Trump administration said on Tuesday. 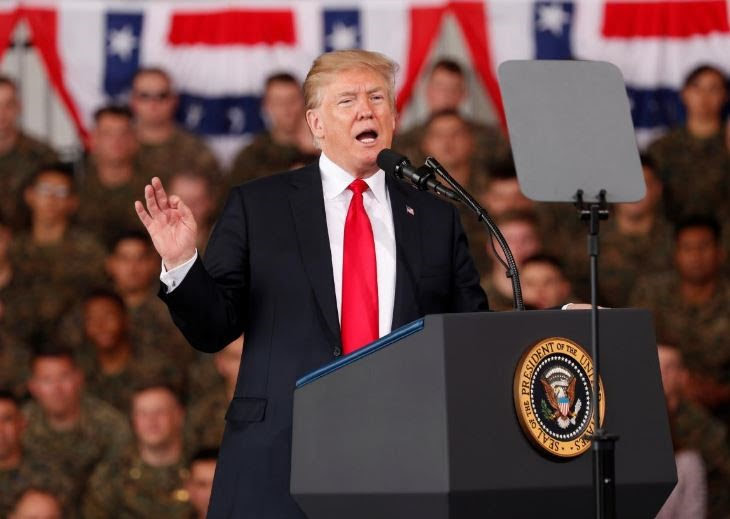 A third source who had direct knowledge of the administration’s thinking said the tariffs, associated with a “Section 301” intellectual property investigation, under the 1974 U.S. Trade Act begun in August last year, could come “in the very near future.”

While the tariffs would be chiefly targeted at information technology, consumer electronics and telecoms, they could be much broader and the list could eventually run to 100 products, this person said.

The White House declined to comment on the size or timing of any move.

In Beijing, Chinese foreign ministry spokesman Lu Kang said Sino-U.S. trade relations should not be a zero-sum game, and that the two countries should use “constructive” means to manage tension.

“We have said many times that China resolutely opposes any kind of unilateral protectionist trade measures,” Lu told reporters.

“If the United States takes actions that harm China’s interests, China will have to take measures to firmly protect our legitimate rights.”

Trump is targeting Chinese high technology companies to punish China for its investment policies that effectively force U.S. companies to give up their technology secrets in exchange for being allowed to operate in the country, as well as for other IP practices Washington considers unfair.

The Trump administration is also considering imposing investment restrictions on Chinese companies over and above the heightened national security restrictions, but details on these were not immediately known. A U.S. Treasury spokeswoman did not immediately respond to requests for comment.

But lobbyists in Washington expressed concern that Trump’s ambitious tariff plan would also include other labor-intensive consumer goods sectors such as apparel, footwear and toys.

“We’re not talking about fancy cashmere sweaters, we’re talking about cotton T-Shirts and jeans and shoes that kids wear for back-to-school,” she added. “Alarm bells are ringing.”

China runs a $375 billion trade surplus with the United States and when President Xi Jinping’s top economic adviser visited Washington recently, the administration pressed him to come up with a way of reducing that number.

Trump came to office on a promise to shield American workers from imports and his first action as president was to pull the United States out of the 12-country Trans-Pacific Partnership trade deal.

His administration is in the midst of negotiations to revamp the North American Free Trade Agreement (NAFTA) and last week announced the imposition of tariffs on steel and aluminum imports.

While the tariffs on steel and aluminum, announced last week by Trump, are viewed as relatively insignificant in terms of imports and exports, moves to target China directly risk a direct and harsh response from Beijing.

“If this is serious, the Chinese will retaliate. The key question is, does the U.S. retaliate against that retaliation,” said Derek Scissors, a China trade expert at the American Enterprise Institute, a pro-business think tank.

That would spook stock markets, but Scissors said that the more serious the conflict became, the worse China’s position would become, due to the importance of its U.S. trade surplus.

“Their incentive to negotiate is to head us off from a major trade conflict.”

The news website Politico earlier reported that the U.S. Trade Representative’s office had presented Trump with a package of $30 billion in tariffs last week, but Trump told aides that this was not high enough.

One Washington business source who had discussed the issue with the White House said the figure had now grown to about $60 billion, with a potentially wider array of products under consideration.

A second person, who is an industry lobbyist in Washington familiar with the administration’s thinking, said the process was being led by Peter Navarro, an avowed protectionist, and by U.S. Trade Representative Robert Lighthizer, who also favors tariffs as a tool to rebalance trade.

Speaking to reporters in the Capitol, U.S. House Ways and Means Committee Chairman Kevin Brady stressed that Trump was serious about addressing the issue of intellectual property theft with China.

“He’s serious about calling their hand on this, and my understanding is they are looking at a broad array of options to do that,” Brady said.

U.S. business groups, while uneasy about triggering Chinese retaliation, have increasingly pressed Washington to take action on Beijing’s industrial policies, such as market access restrictions and the “Made in China 2025” plan, which aims to supplant foreign technologies with domestic ones.

While complaints about China’s abuse of intellectual property rights are not confined to the United States, Trump’s global steel and aluminum tariffs announced last week under section 232 of the Trade Expansion Act of 1962 complicate U.S. efforts to recruit allies to put pressure on China.

A senior European diplomat in Beijing said China would be relieved to see Europe and Washington at odds over the metals tariffs.

A China-based business source with knowledge of discussion among senior European officials said there had been a “clear effort” by the U.S. government over the past six months to introduce a coordinated approach to Chinese industrial policy, but that Trump’s metals tariffs had undermined European support.

“Senior Trump administration officials had directly approached European leaders at a senior level. There had been a willingness to do something together on China. That’s impossible right now. You can’t cooperate when you’re getting whacked around,” the person told Reuters.