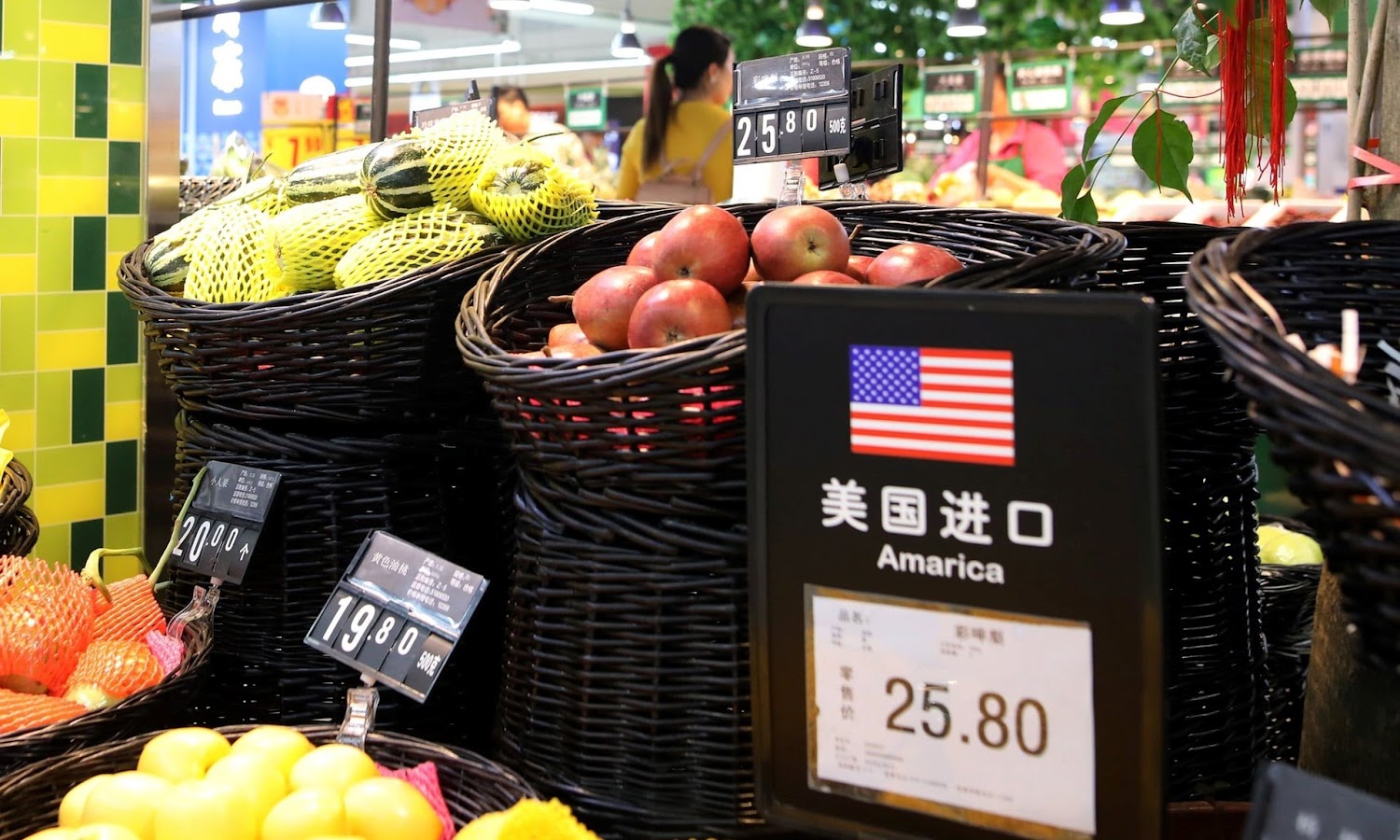 The opening salvos of a tariff spat between the US and China that some observers fear could escalate into a full-blown trade war sent jitters through Wall Street on Monday.

Stock markets fell after Beijing hit back against Donald Trump’s imposition of tariffs on Chinese steel and aluminium with a swath of retaliatory duties on 128 imported American products, including pork and apples.

The Dow Jones tumbled by more than 730 points, or 3%, to 23,368 as a selloff swept the New York market but recovered to end the day down 459 points, or 1.9%. The wider S&P 500 index was also down 2.3% and the tech-focused Nasdaq shed 2.74%. The losses were also driven by further falls for Amazon and Facebook as the tech companies  from Washington.

Food exporters were among the worst hit, with meat producer Tyson Foods down 4.6% to $69.82 while Hormel, which makes Spam, and Pilgrim’s Pride took smaller losses. 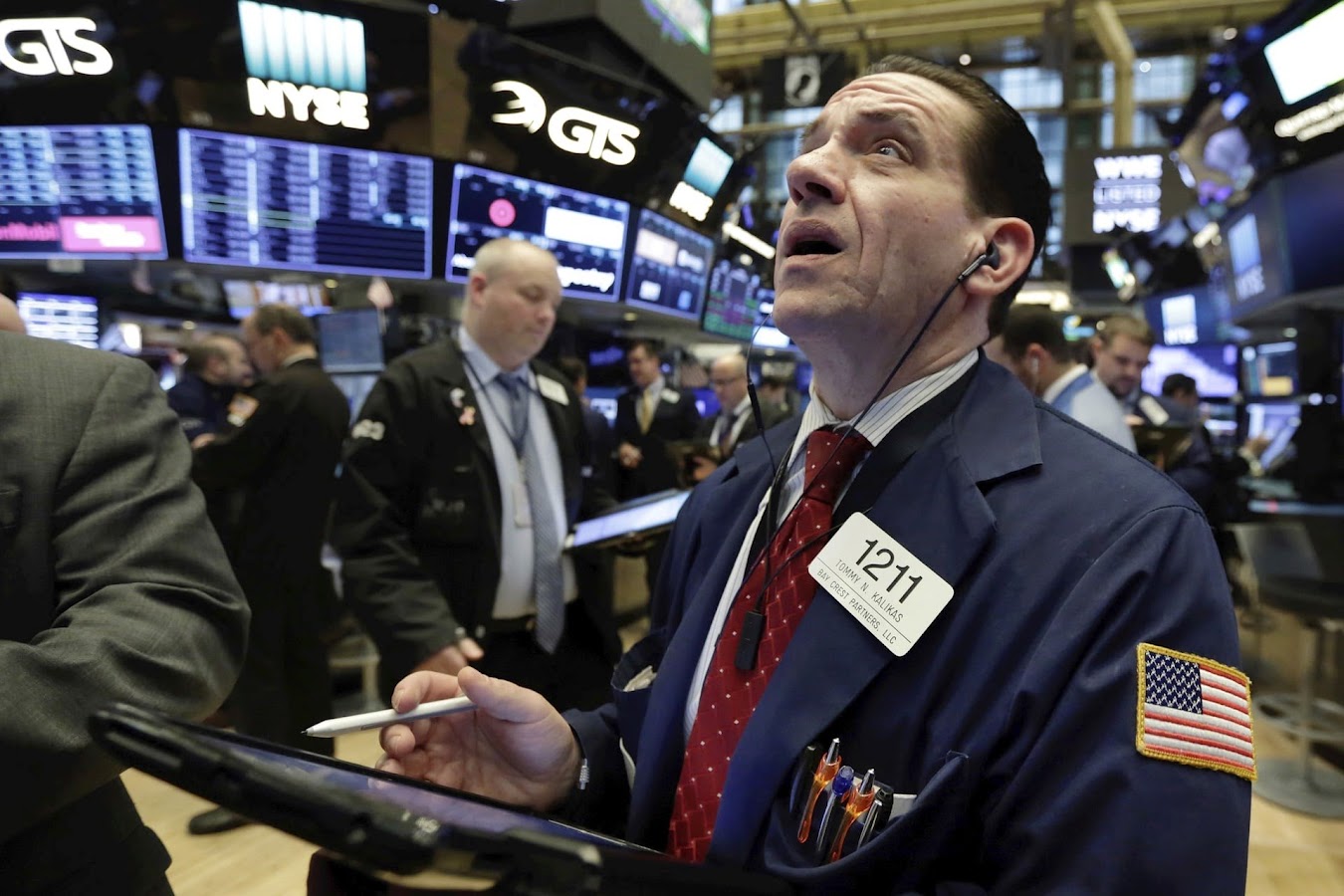 The White House accused China on Monday of distorting global markets and said the country should not target “fairly traded US exports” after Beijing increased tariffs on 128 US products in response to US duties on imports of aluminium and steel. “China’s subsidisation and continued overcapacity is the root cause of the steel crises,” White House spokeswoman Lindsay Walters said. “Instead of targeting fairly traded US exports, China needs to stop its unfair trading practices, which are harming US national security and distorting global markets.”

China announced on Sunday that it would implement retaliatory tariffs of up to 25% on $3bn in food imports from the US, raising the possibility of a trade war between the two countries.

The tariffs were in line with a list of potential duties on US products released two weeks ago in response to Trump’s tariffs on steel and aluminium. The US president has also promised to levy 25% on $60bn in annual imports from China.

The Beijing ministry said “a large number of people expressed their support” for the measures in order to “safeguard the interests of the country and its industry”.

It added that China and the US should resolve issues through negotiation and dialogue. “As the world’s two largest economies, cooperation is the only correct option.”

An editorial in China’s Global Times newspaper warned that America could “say goodbye to the delusion” that China would not retaliate against Trump’s tariffs on aluminium and steel.

“Even though China and the US have not publicly said they are in a trade war, the sparks of such a war have already started to fly,” the newspaper said.

But analysts say the fact that China’s tariffs do not cover some of the US’s biggest exports to China, such as soybeans, is a sign Beijing wants to avoid an all-out trade war.

“The amount subject to tariff is not big, which shows China is willing to ease the intensity of the trade conflict that was started by the US. Trump gave us a heavy shot, and China is giving a light shot back,” said Shi Yinhong, director of the US research centre at Renmin University in Beijing.

China’s economic czar Liu He spoke to the US treasury secretary, Steve Mnuchin, last week over the phone. Mnuchin is reportedly considering a trip to China to continue talks.

Still, some in China are calling for stronger retaliatory measures on soybeans and other agricultural products as well as big-ticket US goods such as Boeing aircraft. China, the third largest consumer of US pork, bought $1.1bn in pork products from the US last year, according to the US Meat Export Federation.

The state-owned Xinhua news on Monday called Trump’s tariffs a “self-defeating gamble.” The editorial, published in English, said: “The threatening tariffs, if realized, may hurt China. Yet the damage will be done at the expense of enormous American interests.”

US senator Elizabeth Warren said on a three-day visit to China that US policy towards China had been “misdirected” and she was not afraid of tariffs.

“We told ourselves a happy face story that never fit with the facts. Now US policymakers are starting to look more aggressively at pushing China to open up the markets without demanding a hostage price of access to US technology,” she said on Sunday in Beijing.

With US-China ties at a low, analysts say the countries are likely to keep struggling over trade.

“Even if this conflict can be eased, it won’t last long. There will be rounds after rounds of trade wars in the future,” said Shi.