Global Geopolitical Risk concerns increased in 2017. Political and economic risks for multinational businesses will increase in 2017, driven by rising nationalism, the elections, succession concerns, and the threat of terrorism. Is this will continue in the next quarter? 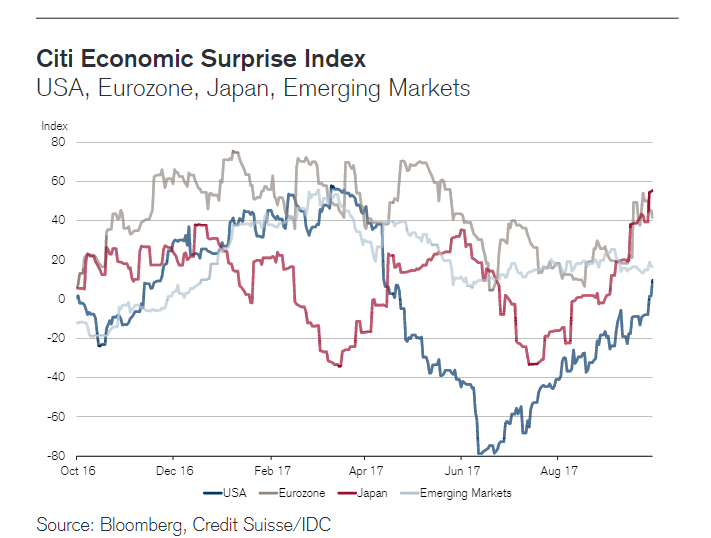 While the hurricane season may subtract from growth, but the U.S. economy continued to expand in the third quarter. Data on employment creation and retail spending remain strong, confirming the main driver of growth, i.e., consumers, are in good shape. Industrial production is also ramping up as businesses replenish inventories and increase investment spending.

After a dismal performance in 2016, the developed economies are now bouncing back to normal and well. The largest quarterly growth since 2011, this was made possible by a further ramp up in global trade volumes, which is due to a further rise in global trade and a new new record last quarter. In Japan, the economy has now been expanding for six consecutive quarters, the longest such streak since 2006. In Europe, economic sentiment is the highest in a decade, reflecting increased confidence among both businesses and consumers. Furthermore, strong economic performance in the matured economies is complemented by continuing strength in emerging economies.  As a result, global GDP growth is on track. Governments around the world are able to successfully navigate risks posed by the rise of trade protectionism, increased debt levels and geopolitical uncertainty. But still need to keep attention and remind the Global Geopolitical Risk effects.